An unexpected detour during a six month stay in France links three generations of my family to a village in the Somme.

On Anzac Day 2015, I left Australian shores for six months travelling solo in France. Unlike my grandfather a century before, I wasn’t destined for the muddy fields of the Somme. My destination was another part of rural France altogether – Cinais in the Loire – the first of a series of housesits courtesy of a housesitting website called MindMyHouse.

While I was in the Loire, I started an online search of my grandfather’s war service.

My grandfather – known as Syd – enlisted in November 1916 at the age of 23 and was made a gunner in the 12th Field Artillery Brigade. At 5’ 8” and of slight build, he would normally have been considered too small for such a physically demanding role.

My father had little opportunity to find out about his father’s experiences in the war.

Syd died in 1947 – when Dad was just 18 – of complications from his exposure to mustard gas. While I was in France in 2015, Dad was very much engaged in my research on his father, a man he described as his ‘great friend’. I gained an insight into how hard it must have been for Dad to lose his father so early. And then to take on the family engineering business at so young an age.

It was a privilege to undertake this research on my father’s behalf.

He was an only child who had no one else’s memories to compare with his own. It was my gift to Dad, who had spent much of his working life overseas when I was a child. I got to know him better from a distance of 10,000 miles away. He got to know his own father better with every piece of information I gathered.

In the course of my research online into the national archives, I found the 1918 trench map indicating the target of Syd’s brigade on the day he was gassed – an area that was then called St Martin’s Wood. I was then able to work out the exact co-ordinates for the 12th Field Artillery Brigade on that day. The ‘guns’ used in WWI were 4.5 inch howitzers – more like cannons than guns. They were trained on the fields of battle from artillery brigades positioned several miles away.

Syd and his brigade were on the outskirts of a tiny village called Chuignolles, guns facing in the direction of St Martin’s Wood to the south-west, when they came under attack from mustard gas.

I managed to locate the exact spot of the attack, as designated by the co-ordinates. There I scattered dried poppies and rose petals from the Loire around the (kind of) ‘boomerang’ branch and the (kind of) Australia-shaped stone I had found in the fields near Cinais. 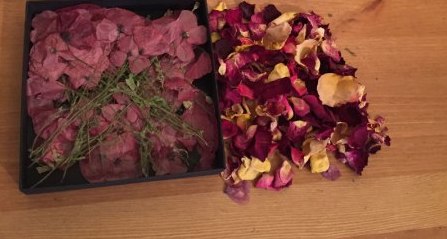 Four months earlier, when I left Australia for France, I had no idea this journey to the Somme would be part of my time there.

I had brought nothing from home to leave at the site. Somehow the petals, wood and stone were just right. I treasure the memories of the valuable time I spent with my grandfather.  And the opportunity it gave me to learn more about his son. Dad died on Anzac Day 2017.

April 25 2018 will mark the first anniversary of my father’s death and the centenary of the famous ‘night of the Australians‘ when Australian troops pushed back the Germans from Villers Bretonneux, just 10 miles from Chuignolles.

I plan to attend the dawn service at the Australian National Memorial at Villers Bretonneux on April 25 2018.

On the anniversary of my father’s death, I will return to that beautiful part of France. Once the scene of battle, it is now a place of peace. I will remember my father and his father in the countryside that brought the three of us together. Surrounded by the gently rolling hills of the Somme, I can’t imagine a place I would rather be.

Here is the link to the video I made for my father at Chuignolles in 2015.

This site uses Akismet to reduce spam. Learn how your comment data is processed.